The way Gabriella Wilde tells it, acting found her. “I never actually even thought about being an actor until I was 20 and I got asked to audition for a movie,” Wilde recalls. Enrolled at City and Guilds of London Art School at the time, the British-born beauty subsequently auditioned for the film, which she didn’t end up doing, “but that’s where the interest started,” she says.

I have a lot of sisters so beauty has always been a part of my life.

Transitioning to the big screen wasn’t too much of a stretch for the painting student. “I did a lot of portraits because I was very interested in portraying other people— which is probably why acting appealed to me—because it was something where I could literally be other people,” she explains. That Wilde also has a face for film—and fashion—certainly helped: her angelic features and long, cornsilk locks compelled Burberry creative director, Christopher Bailey to cast the now 24-year-old as the face of his Fall collection in 2012, which she quickly followed up with editorial spreads in style bibles like V and Another Magazine. Then the film roles came fast and furious, with her breakout debut as Sue Snell—the mean girl with a good heart—in 2013’s Carrie, and a starring turn alongside Alex Pettyfer in this year’s cult-romance, Endless Love.

Wilde’s patrician good looks come part-and-parcel with being descended from the aristocratic Gough-Calthorpe family, but her noble ancestry has little to do with her rise to fame in Hollywood, where she currently spends her time when she’s not in London—or New York. We recently caught up with the new mother as she tended to her newborn son, Sasha Blue, on the set of her first campaign shoot as our latest face. Here, Wilde tells The Estée Edit about her beauty education growing up with six sisters, her favorite multi-tasking makeup tip, and why she never watches her own movies.

On Being Tri-Coastal: “I still live in London but I’m back and forth between New York and L.A. New York is a little more fast-paced than London, but it is very European so it feels most like home. I feel like an alien in L.A.! The whole city revolves around film so every single person works in the industry, which is a little bit strange.”

On Acting: “I like acting because I love the creative process. You meet with all these amazing people, and you get to spend three months working with them instead of just one day! It’s such a collaborative process, even though I never watch the end result. I hate seeing myself on screen!”

On Beauty: “I have a lot of sisters so beauty has always been a part of my life. I’m one of the youngest so I always wanted to emulate my older sisters from a young age—to use the same creams and makeup that they all used. I’ve figured out my own way as I’ve gotten older, and I’ve benefited from letting them make the mistakes for me in the 90s! But my mom always used the same products, so I sort of learned to ‘stick with what you know’ from her.”

On Skincare: “I don’t do a lot to my skin because I don’t have too many problems with it. I’ve actually

only ever had one facial! I do love a good moisturizer, though, like the Nutritious Vita-Mineral Moisture Creme. And a good makeup remover, especially at night after I’ve been working on a movie.”

On Hair: “When I was little I had a short bob, but since my teens it’s always been really long. It’s always been this blond, too. It was white-blond when I was a child! I’m kind of interested in going dark but I haven’t had a role that has allowed me to yet. I’m always trying to convince the directors, too, like ‘maybe she should
be dark?!”

On Post-Baby Beauty: “I am definitely paying a lot more attention to being healthy, and being conscious of what I’m eating and using on my skin. You’ve got to remember to focus on yourself, even while you’re looking after your baby.” 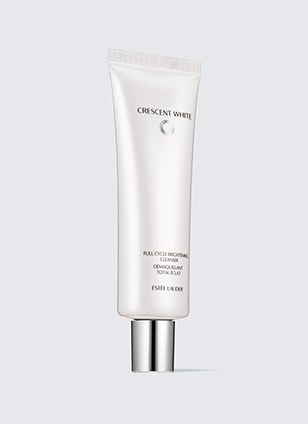